The long and winding road away from AVEs in Southeast Asia

You are here: Home » AMEC Member Article » #AMEC25 » The long and winding road away from AVEs in Southeast Asia 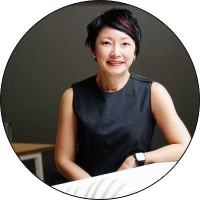 AMEC celebrated its 25th anniversary last year and it may be quite tempting to think that the battle to abandon AVEs and put in place more meaningful metrics has been won.

This may be so in Western countries, but in many parts of Southeast Asia  the battle is still being waged, trench by trench, because until last year AMEC has been little heard of, its frameworks and the guiding principles for communication evaluation still largely unknown, and AVEs still rule.

An August 2021 poll conducted by my workplace Maverick Indonesia, during a forum at PR Indonesia, an association of professional communicators, indicated that 78% of the industry was still using PR Value (AVE derived metric) to measure their communications success. The silver lining to that survey’s results, however, was that 22% of their respondents had heard of and have moved toward AMEC measurement standards or metrics similar to that.

Why the slow uptake of AMEC Integrated Evaluation Framework (IEF) and the Barcelona Principles, and what happened in 2020-2021 to see a sharp increase in adoptees?

We think that our own journey from measurement ingenues to advocates of AMEC evaluation frameworks would provide an insight into the development and potential of the Southeast Asian market for meaningful measurement practices.

Like other communications consultancies in Southeast Asia we had been using AVEs with growing unease. Counting news clips as a measure of success did not make much sense but we did not know better.

Then we attended AMEC’s Summit in Barcelona in 2018, our very first time,  and the coin dropped. There it was, in talks we attended, instances after instances of how the results of communication can be quantified and its impact measured.

When we got back to Indonesia we began our measurement journey and mapped out a strategy for change.

The first thing we did was to start the change within our organization. We had several training sessions, introducing the concepts, the terminology and the arguments needed to effect our move from AVEs to meaningful metrics.

When we had the language and the knowledge we formed an analytics team that was to be the nucleus of change. They would become the champions and advocates in measurement and evaluation, initially within our  organization and eventually to a wider audience of clients and fellow communicators.

The team’s responsibilities included working and supporting alongside the consultants to ensure that for every strategy and tactic are in line with the set objectives and they are measurable.

When we felt that we had gotten our house in order, it was time to take the message outward. We started scheduling meeting with clients to explain why we needed to move away from AVEs and counting news clips.

Some of our clients couldn’t understand why we should abandon AVEs. Many expected a one size-fits-all metric like AVE. Others said they understood and agreed – but their regional office still wanted AVEs and PR value. We took the highs and the lows of this in stride as we realised that a journey is never a straight line.

The persistence paid off as by the end of 2021 we managed to transition all of our clients to adopt AMEC IEF and abandon PR value. Discussions on how to measure communications success started at the very early stage during new business pitches. We won businesses as a result.

Our next mission was to nudge the PR industry toward the AMEC IEF under the Barcelona Principles.  We started giving talks and seizing any speaking opportunity to spread the word. It was slow going but toward the end of 2021 we began to feel some traction.

For these debut events we had no less than AMEC Global Managing Director, Johna Burke, and Chair, Richard Bagnall, as speakers. It was an honour for us to have both Johna and Richard to speak to the Indonesian communication professionals and the C-level executives for the first time.

We received inquiries about AMEC and many pleasantly surprised to find out there is an alternative to AVEs.

It has been a long journey, yet worthwhile. I hope that our effort and advocacy will continue to influence decision makers in many boardrooms to abandon AVEs in this part of the world. Also, where it applies, for communicators not to give up hope trying to advocate for meaningful measures.

The recording of the two webinars that we delivered during AMEC Measurement Month are available via the links.

Proving the Value of Communication through Measurement

Felicia Nugroho, Head of Analytics and Insights at Maverick Indonesia.

Determining the value communication brings to your organization.

The AMEC Global Summit on Measurement is back! 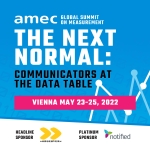 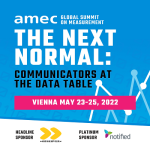