“Successful #AI Response is in Minutes not Months.”

You are here: Home » AMEC Event » “Successful #AI Response is in Minutes not Months.” 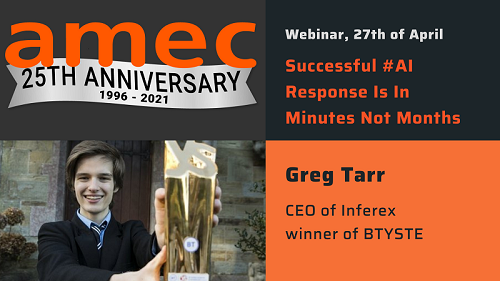 Webinar with Greg Tarr, CEO of Inferex, and winner of the BTYSTE

AMEC yesterday hosted (27th of April) a free webinar with special guest Greg Tarr who talked about how to mitigate deepfake risks.

Greg started his presentation by explaining how winning the BT Young Scientist & Technology Exhibition this year has changed his life. In total he has won 8 awards at BT Young Scientist, 6 for work in AI/ML including BTYSTE along with the Stripe, Bell Labs, and Intellectual Ventures special awards.

Started with Scratch at the age of 4, and properly coding at the age of 12. Six years later, he devised and advanced computer program using Artificial Intelligence to detect deepfake videos, faster and more accurate than any of the current state-of-art detection systems. Now, at the age of 18, he is the CEO of his own infrastructure start-up called Inferex, made possible through angel funding.  This young entrepreneur advised the Joint Research Center on deep fake policy.

In his presentation Greg explained the approach he followed, and how he impressively improved he efficiency of deepfake detection. He used a sophisticated AI program with more than 150,000 lines of code, securing significant improvements on speed and efficiency when compared to the current best model, without sacrificing its ability to accurately detect the fake.

He explained why deepfakes are such a big problem, especially given that in 2 years’ time they will be undetectable (as they are already indistinguishable from authentic media), how we can protect ourselves against deepfakes, what are the challenges of Artificial Intelligence, and outlined the stages to benefiting from Artificial Intelligence and Machine Learning.

Greg shared the value of AI and how the application is under-exploited due to technical barriers to entry. In his wisdom, he also emphasized the need to be an active citizen and campaign for better legislation, have high media literacy, and just think critically.

And a final tip:  If your company is not using AI/ML you’re probably losing out. 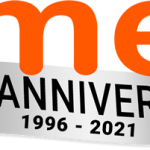