The only certainty in Election polling is a confluence of uncertainty.

You are here: Home » News » The only certainty in Election polling is a confluence of uncertainty. 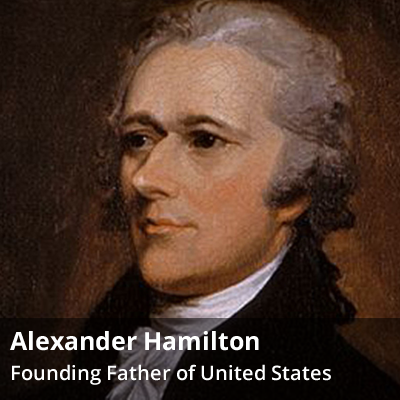 “What if Alexander Hamilton Were Running for President in 2016? How Would He Poll?”

In the United States the most en vogue founding father is not a president – though, according to a February, 2016, Washington University study appearing early in the presidential primary season, about 71% are fairly confident he was.
That most notable founding father, the one whose name is emboldened as a star on Broadway and displays prominently on the $10 bill – is Alexander Hamilton.  Hamilton was thoroughly scandalized and famously, fatally wounded in July, 1804, after having dueled with Aaron Burr, himself a Vice President under President Thomas Jefferson…and while the events surrounding Hamilton’s last days swirl images of this figure in the public consciousness much like the tempest of this election season, Mr. Hamilton might just be more relevant than ever before.
It is ironic, in 2016, in this, one of the most significant and fiercely-contested elections of our time, that Mr. Hamilton should emerge as one of the most talked-about individuals.  If he were running for President in 2016, would he win? Would he have been nominated? How would he poll?
As market researchers, we gauge public opinion.  As public relations experts, we release the story about this opinion to the press.  A great deal of pressure rests on the pollster this season as the media and influencers in this space debate whether opinion is swaying voting or the other way around.  Developing a questionnaire and designing a poll to produce proper results is intense – reporting and releasing the results even more so.  Does our poll resemble those of others such as CNN, CBS, Monmouth, Fox, Quinnipiac, etc.?  Upon releasing poll results, we sit back and compare.  If we ‘match,’ we feel good.  If we are ‘off,’ we panic.  Then, the primary, caucus or general election takes place, and we find, for example, we polled against the norm – but we match real results.  Or we polled against the norm and real results.
We would like to think polls reflect real voting behavior since the industry has been conducting political surveys for decades.  However, the election of 2016 seems to call that long-held tradition of polling into question.  And, to add to the anxiety of the season, we must brace ourselves for the fact that polls are not steadfast predictors – they are capturing moments in time reflecting, for example, registered or likely voter behavior at the time. And we use these ‘photographs of time’ to help us try to predict the election outcome.  The only certainty, it seems, is a confluence of uncertainty.
We design sample sizes and geographies, as well as quota groups with precise quotas to be able to poll and review results against the U.S. Census statistics for the nation or state or county.  And, frequently, when we don’t match, we weight. And we wait.
In a typical study – and even in other election years – weighting is welcome.  Not as much so with political polls in 2016.  This year, depending upon party and one’s views, weighting can either be perceived to help or hurt….help or hurt perceptions or, even, help or hurt a candidate’s chances.
Not every pollster will make the same decision on study design, sample source, respondent qualifiers (e.g., based on past voting history or likely voters) questionnaire content or geographical definitions.  And, same-region polls do not often occur simultaneously.  One organization might conduct a national poll mid-September (say, starting September 15) with likely voters; another organization conducts a similar poll (i.e., with likely voters) just after the first Presidential debate in late September (say, starting September 27); but another conducts a poll focused on registered voters during the second week of October, just after the second Presidential debate (say, starting October 10).
Voter perceptions can be capricious.  Person A might be on the list to be called for the first poll and also on the list to be called for the second poll.  However, Person A, while he might harbor a view of one Presidential candidate on September 15, changes his mind on September 27 after having heard the first debate.  And, if this person is called on October 10 as a registered voter and has changed his mind yet again after the second debate, this one person – and hundreds or others like him – can move the marker, sometimes significantly
As researchers, we try to ‘get it right.’  We know voters can change their minds, and, while the undecided factor seems exacerbated this election season, pollsters are trying to make the best decisions possible amidst the latest political and research currents.  Decisions are made when planning each study, but also they are made when the results come pouring in.  What are some of these decisions?

Let’s take a simple example:  let’s say we are conducting a study with N=100 respondents and the raw data show n=75 males and n=25 females.  However, in the real world, male/female ratios are about 50/50.  Thus, all males would receive a weight or .667, and all females would receive a weight of 2.00.  An organization, prior to releasing results, will look at the data and might choose to weight only on gender (if all other demo groups fall in line with statistics), or the organization might decide that multiple groups are worth weighting – which means a more complex multiplier with more combinations.  It is not, of course, as simple as this in the real world – which is precisely why so much discord exists on this issue.

It is a careful balancing act so as not to present a result peppered with any bias, and as we have seen these past months, ‘weighting’ is a hot topic in election news.  Not to mention considerations given to original study design to account for declining response rates on the phone.
And, while myriad political polls are conducted using scientifically-based polling (primarily via phone but some online), we find that real-time, instant online polls are gaining traction this season, accompanied by their own opponents and set of issues that must be resolved – particularly, when it comes to panel source and sample selection. Survey research is both an art and a science and trained researchers in this area employ the most appropriate and relevant poll designs in their quest to deliver the soundest design.
From the early days of print to today’s social media boon, the ever-present threat of negative ‘breaking news’ looms.  Polls and public relations serve to counter-balance the negativity and try to raise a candidate from the tumult of ‘pounding waves against the rocky coastline’ – hoping to encourage top-of-mind recall and success in the ballot box.
Finally, as those in the U.S. know, though, polls and popular vote aside, the Presidential election is ultimately decided through the Electoral College, a system Mr. Hamilton, himself, created and one he praised.
Of his Electoral College, he wrote, “I venture somewhat further, and hesitate not to affirm, that if the manner of it be not perfect, it is at least excellent. It unites in an eminent degree all the advantages, the union of which was to be wished for.”
But, then, this iconic founding father – one plagued by scandal but revered by many of his contemporaries for his intelligence, the founder of our federal financial system and a significant force in the state of New York, the man now idolized through music – while eligible, did not run for President of the United States.
Sources:
Cassino, Dan.  “How Today’s Political Polling Works.”  Harvard Business Review.  August 1, 2016, https://hbr.org/2016/08/how-todays-political-polling-works.  Accessed October 27, 2016.
Cohn, Nate.  “How One 19-Year-Old Illinois Man Is Distorting National Polling Averages.”  The Upshot.  The New York Times.  October 12, 2016,  http://www.nytimes.com/2016/10/13/upshot/how-one-19-year-old-illinois-man-is-distorting-national-polling-averages.html.  Accessed October 27, 2016.
Cohn, Nate.  “How Polling Can Go Wrong.”  The Upshot.  The New York Times.  June 30, 2016.  http://www.nytimes.com/2016/07/01/upshot/how-polling-can-go-wrong.html?_r=0.  Accessed October 27, 2016.
Everding, Gerry.  “Americans recognize ‘past presidents’ who never were, study finds.”  Washington Univ. in St. Louis.  The Source.  February 9, 2016, https://source.wustl.edu/2016/02/americans-recognize-past-presidents-never-study-finds/.  Accessed October 27, 2016.
Hamilton, Alexander, “The Federalist No. 68, the Mode of Electing the President from the New York Packet.”  The Federalist Papers. Yale Law School Lillian Goldman Law Library in memory of Sol Goldman.  Friday, March 14, 1788,  http://avalon.law.yale.edu/18th_century/fed68.asp.  Accessed October 27, 2016.
N.A.  “The Good & Bad of Weighting the Data.” National Council on Public Polls.  http://www.ncpp.org/?q=node/39.  Accessed October 27, 2016.
N.A. Playbill from the Original Broadway Production of Hamilton. “Hamilton.  An American Musical.”  Music, Book and Lyrics by Lin-Manuel Miranda, and based on the book, Alexander Hamilton, by Ron Chernow, published in 2004 by the Penguin Press.  https://en.wikipedia.org/wiki/Hamilton_(musical). Accessed October 27, 2016.