You are here: Home » Nation’s Ode to the Coast – Indigo Le Fevre

Category: Best campaign in the public and not for profit sectors

Since 2014, the National Trust has sharpened its PR evaluation framework to focus on:

The National Trust charity cares for special places forever, for everyone. It relies on the support of donors, members and volunteers to safeguard iconic and important land, woodland, nature, coastline and buildings.

Consumer PR is crucial in shaping, shifting and sharing the National Trust’s story to retain and attract supporters. However, every pound spent on PR needs to be proven effective, particularly on creative consumer campaigns.

Therefore the objectives for creative consumer PR measurement and evaluation are:

To measure and benchmark action

For the purposes of this entry, we use the multi-award winning 2015 campaign “The Nation’s Ode to the Coast” to demonstrate the National Trust’s effective use of an evaluation framework.

The overall objective for the campaign was:

Achieve a successful Autumn fundraising push for the National Trust’s coastal fund ‘Neptune’, in its 50th anniversary year, by using consumer communications from June – October 2015 to prime our audience to donate, join or volunteer

(‘Neptune’ has enabled the Trust to purchase and care for 775 miles of iconic coastline, including the White Cliffs of Dover, the Gower and the Great Orme, since it launched in 1965.)

There were two key challenges to overcome via our communications campaign:

We needed measurement between June and October 2015 to prove we were meeting our goals to:

Increase public awareness of the National Trust’s work caring for coast, for ever for everyone
Measured via:
Quality audience reach
Key message delivery
Increased recall of the Trust as protecting coast

Increase public affinity for conserving coast
Measured via:
Shift in positive public sentiment towards NT vs other coastal charities

However, whilst it was clear WHAT we needed to do, HOW best to do it required an element of research, to better understand what would help the public to re-engage with the coast (and the National Trust’s cause).

We turned to behavioural science and research about charitable giving, which suggested a positive approach (rather than a jeopardy message) and showing WHY our message mattered to our audience (not to us) was key. Our answer lay in a strategy of HUMANISING the coast NT protects – talking coastal EMOTION, not coastal erosion.

Using Gorkana’s previous analysis of other campaigns we were able to further support this, identifying that a positive campaign would deliver more reach and key message delivery compared to a negative one.

When talking to the public, it became clear that even if their connection to the coast was reportedly low, everyone could quickly recall very fond memories of the coast as a child (piling into the car, cries of “are we there yet?”, the first view of the sea, the obligatory ice cream…). We saw that by reframing the coastline the Trust cares for as 775 miles of MEMORIES, rather than 775 miles of coast, we could create a universal message that could become very personally relevant and shareable, encouraging the public to “fall back in love with the coast”.

Our creative idea was to kickstart “The Nation’s Ode to the Coast”, a love poem to the coast which was then handed over to be written by the nation, inspired by their memories and hopes which they shared using #lovethecoast (or by writing to the National Trust or completing a ‘coastcard’ at one of the Trust’s properties/events).

This approach meant we further tweaked our measurement approach to reflect the creative idea:

A channel neutral idea to be used across earned, shared, borrowed and owned media (eventually, paid), so we knew it needed a variety of data sources to measure upon. Once we had the idea, we drafted a measurement framework covering each campaign phase.

Specialists from Mischief, NT and suppliers including Gorkana provided their expertise to sharpen the framework. We used this to benchmark what we should expect to achieve and ensure we were using meaningful KPIs.

We then added more detailed sources/metrics and used a variety of suppliers/sources to ensure it was clear, useful and accurate. We incorporated both real time measurement that could be used to tweak campaign performance during live activity and longer-term measurement that would demonstrate our impact on overall goals and objective. These were:

To check the robustness of our framework, we created an ecosystem of the whole campaign, plotting each of our activities/outputs and what we wanted people to do next, to check that we had considered the entire consumer journey in detail and our measurement reflected this journey.

One thing that was crucial for us was to ensure that the framework was “live” and happening in real time, so we could monitor performance and act accordingly on shorter-term metrics. For example: we wanted to be able to see the direct impact of coverage on # usage and we wanted to evaluate each stage of the six month campaign to ensure we were on track to meet our awareness objectives.

In terms of evaluating performance of the campaign against our goals…we smashed them. Full details and sources are in the attached appendix, but in brief:

Increasing public awareness of the National Trust’s work caring for coast, for ever for everyone

Anna Organ, Gorkana says, “This approach is an excellent example of the power of an integrated measurement framework creating a media campaign that focuses on the desired outcomes and actions to be obtained from the target audience.”

In addition to the tools and data sources outlined above, we also used a new approach for measurement and evaluation of PR activity – qualitative research with consumer groups. This was delivered by Fly Research and benchmarked awareness of, and attitudes towards the coast’s coastal conservation work before and after exposure to the campaign coverage/content/conversation. As well as data on percentage shifts in attitude and affinity, it provides consumer insight and verbatims that provide useful colour over and above the data points we have from our various sources.

As a result of this work, the Trust has innovated its measurement approach, adopting a new integrated measurement framework “AIDAH” which enables channels to identify what they will contribute to the overall success of a campaign and for the impact of one channel on another to be considered.

Laura Appleby, National Trust, says: “ This campaign owes as much of its success to planning, strategy and evaluation as it does to creative craft and dogged delivery. Blood, sweat and tears went into reframing our challenge to deliver a truly compelling integrated communications campaign that completely changed the organisation’s view of what earned media thinking can deliver. This was a real turning point for the organisation, with a wide variety of specialists all focused behind one objective and their role in monitoring, measuring and achieving the goals that would get us there. As a result, we have introduced a new, integrated approach for measuring and evaluating integrated campaigns, which we call AIDAH. This puts the onus on individual channels to work together on achieving a shared vision, considering how their channels need to each work together on reaching the goals to get there.”

Anna Organ, Gorkana, says: “The bespoke evaluation model developed for this campaign was always designed to go way beyond coverage output. Aligned to the three objectives developed in the planning phase, it was designed to reflect the strategic framework and manifesto of the campaign and measured shifts in sentiment, awareness, advocacy and action vs National Trust benchmarks, not just at the end but throughout. It was the Trust’s most successful proactive campaign of 2015 and reflects a modern and commercially-focused approach to real-time measurement.”

In terms of key learnings, we were able to establish from our measurement and evaluation a wide range of information to guide future campaigns, eg:

The attached framework shows the campaign within the AMEC Framework.

It is clear the campaign:

The evaluation demonstrated good commercial value for the client, as investment for the campaign was proven to directly drive these outcomes and it was possible to directly link coverage and conversation to consumer awareness, affinity and action.

As a result of the approach used on this multi award-winning campaign, there have been a number of changes to both campaign planning and evaluation: 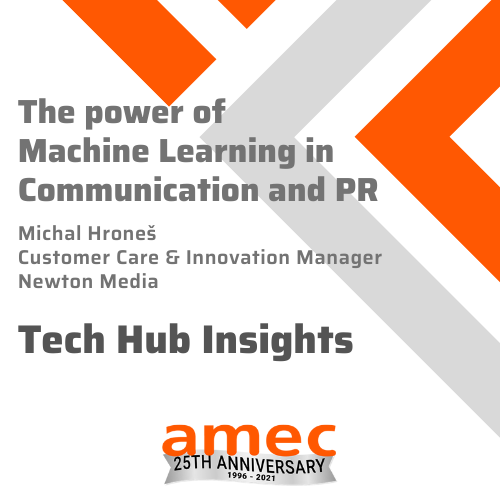 The power of Machine Learning in Communication and PR